In a surprise move, the Swiss National Bank un-pegged the Swiss Franc (CHF) from the Euro, a policy that had been in place since 2011. This unexpected decision from SNB President Thomas Jordan caused severe volatility in the middle of the night (US time) on Thursday, January 15th. In a matter of minutes, the Swiss Franc climbed against the US Dollar as much as 27%.

Given the leveraged nature of currency futures trading and even higher leverage in forex trading, this move was crushing to some investors and even some forex dealers. You may have seen reports about FXCM, a large forex dealer, being rescued by a significant cash infusion from an investment bank. Some firms involved in forex have closed their doors entirely.

Rather than comment on the changing fundamentals of the currency market, we will refer you to a couple articles with links at the bottom. Instead, we want to take an opportunity to remind everyone that risk management is not merely an annoying constraint we put on ourselves. It is an essential and necessary part of trading! Look at the two charts below of the USD/CHF. The first is daily bars and the second 30-minute bars. 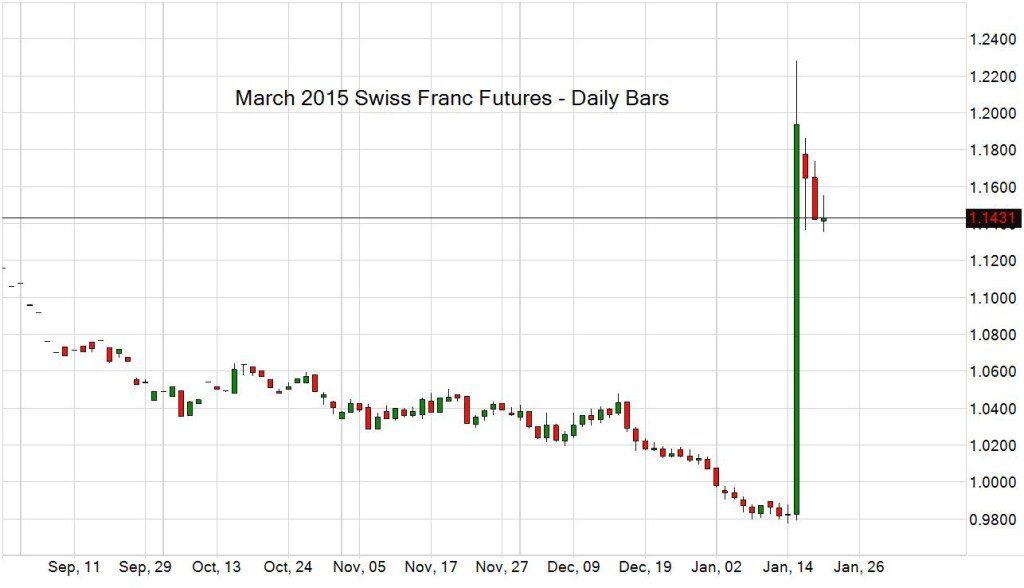 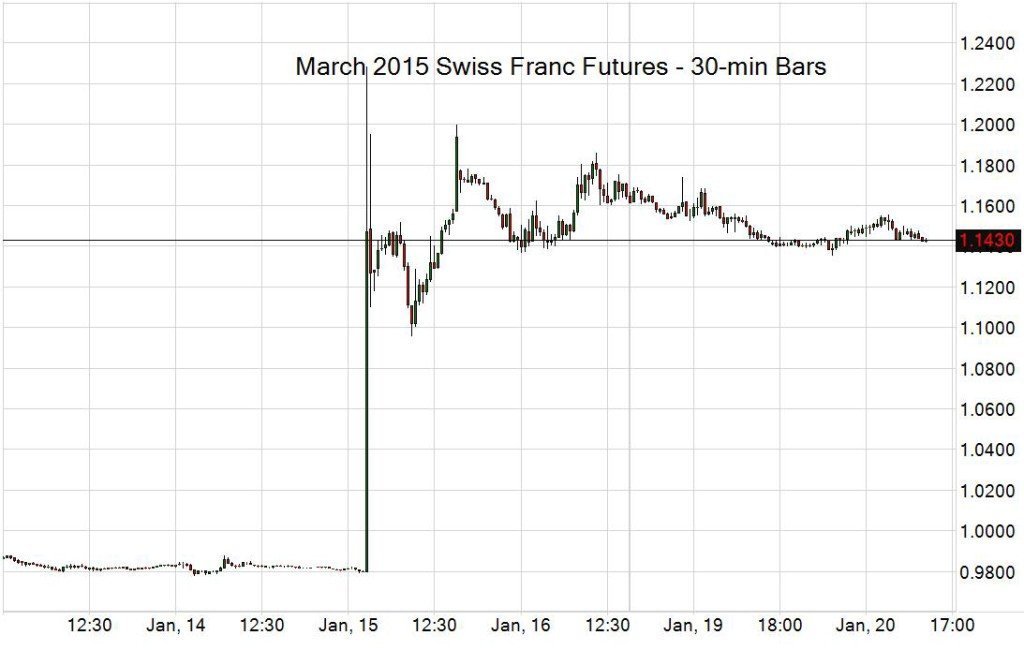 You can see that being on the wrong side of this move was devastating. On the other hand, if you happened to be positioned right, you might have experienced a windfall. Either way, note the severity of the volatility. One decision from a central bank created an explosion that shouldn’t be taken lightly. Remember, central banks can do this sort of thing.

To put this move into perspective, the Dow Jones lost over 14% by the Friday following the markets’ reopen after Tuesday, September 11, 2001. The S&P was down 11.6% by the end of that week.*

Much more can be said about risk and reward during spikes in volatility. For now, we encourage you to have an informed discussion with your broker about risk, volatility and how you can potentially decrease your risk by using Managed Futures, options, spreads, etc.

Articles for further reading on the Swiss Franc:

Have questions? Call or email us!

Disclaimer: Trading futures, options on futures, retail off-exchange foreign currency transactions (“Forex”), investing in managed futures and other alternative investments are complex and carry a risk of substantial losses. As such, they are not suitable for all investors. This website contains information obtained from sources believed to be reliable, but such information has not been independently verified and its accuracy is not guaranteed by Foremost Trading. Past performance is not necessarily indicative of future results. Any mention of performance in any context whether actual or hypothetical is no guarantee of future results. Foremost Trading became a registered ‘dba’ of RCM Alternatives in July of 2020. Please see full disclaimer here: https://www.rcmalternatives.com/disclaimer/